Free shipping within DE from €39, Austria + BENELUX from €59

An often overlooked bee product with an outstanding role in the hive: propolis. At first glance, it is a sticky, resinous sealant that only reveals what it can do at second glance: Propolis not only protects the beehive from intruders through cracks and crevices, but also from the spread of infections inside Propolis provides protection.

What is the most sterile environment that nature knows? Every beekeeper will now answer you: a beehive! Bacteria, fungi and viruses can hardly get a foothold in a beehive and the reason for this is propolis.

In this post we would like to take a deep look inside a beehive and try to solve the secrets surrounding propolis. What is propolis and how do bees make it? Why and for what do many people use propolis? What is propolis made of and what does it do to the beehive? We will get to the bottom of all these questions in this article and devote ourselves in detail to the putty resin with the strange name propolis. 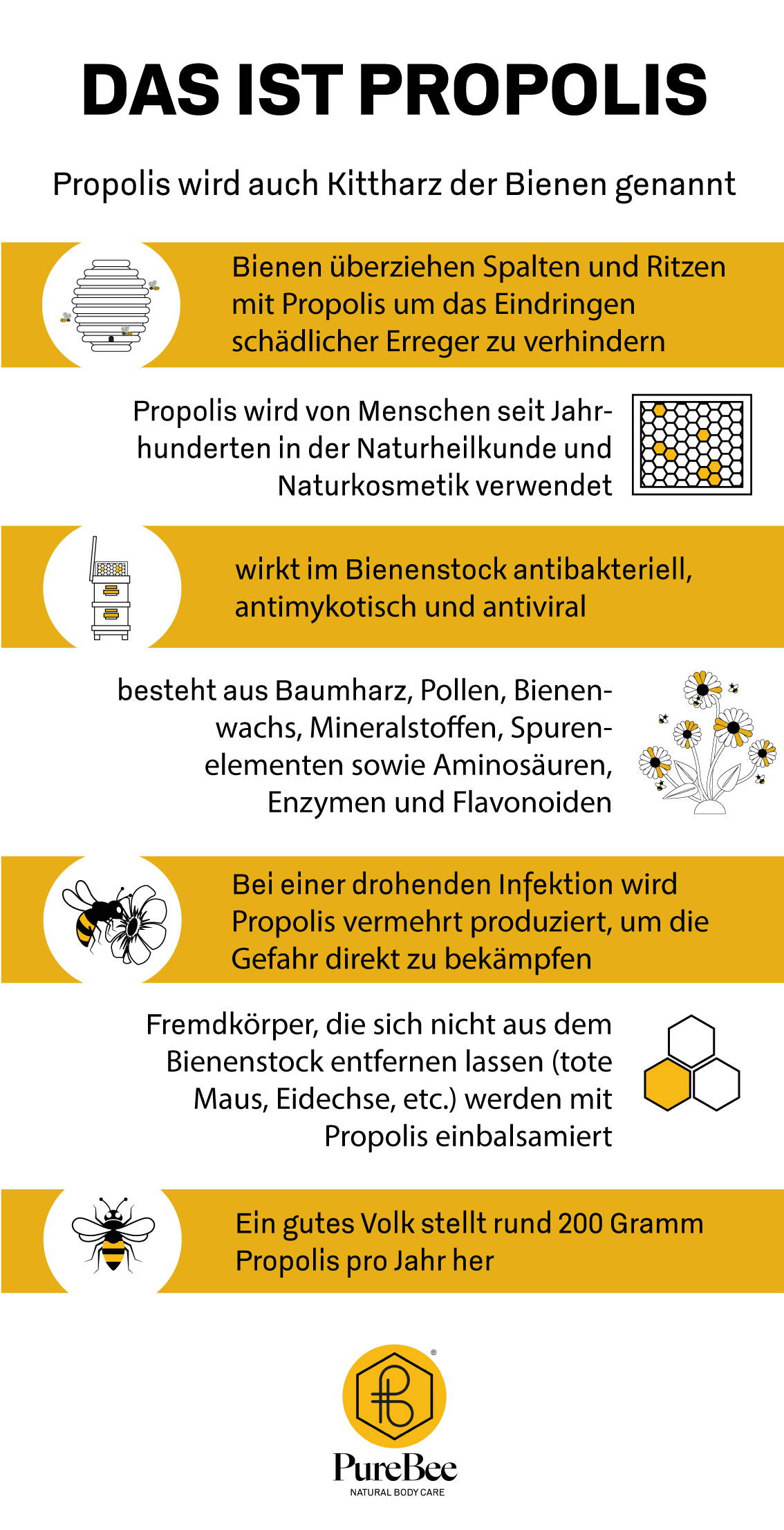 The Duden describes propolis as "resin-like, germ-free mass that bees collect from the buds of the deciduous trees in order to line the inside of their beehive". By definition, it can be described as a substance that bees produce by collecting tree resin. Due to the resinous property and the actual use, propolis is often also used as a bee putty or putty resin. The term “putty” comes from the task that propolis takes on in the beehive. Bees mainly produce propolis to seal all open joints. A side effect of this putty is that it has an antibiotic, antiviral and antifungal effect on the stick. This ensures that harmful organisms are inhibited in their development or even killed.

Small fact on the side: "Propolis" is used in feminine usage as a feminine ("the propolis") even if all forms are used colloquially. Ultimately, it doesn't matter whether you say the one or the propolis, the main thing is that it serves its purpose.

How does propolis arise?

A beehive is an absolutely hierarchical organism. At first glance at a stick the whole hustle and bustle may seem confusing, but it is absolutely orderly in the bee colony and each bee has its assigned task, according to its age. Some of the bees are in brood care, the others are collector bees and fly out to collect raw materials, and still others are responsible for the processing of the materials brought in on the hive.

To make propolis, the collecting bees first fly out to collect resin from the trees. Anyone who has ever touched a resinous branch knows that it sticks scary. However, the bees scrape it off with their mouth tools (mandibles) and enrich it with saliva without sticking. They stow the collected resin in their pollen pants on their hind legs and fly it back to the stick. There the hive bees help to remove the sticky substance from the pollen pants and take over the further work. The hive bees chew the resin enriched with saliva until it has the right consistency, adding pollen, wax and other organic substances. In the end, the former tree resin becomes propolis, which the animals immediately place in the beehive where it seems necessary.

Discover some of our PureBee products with propolis

With the hype about bees, which has become more and more widespread in recent years, there is more and more information on the Internet and on TV for which purposes propolis can be good. You could almost say my propolis is a recent discovery and science has only just become aware of it. But you're far off the mark since the history of propolis begins much further back in the past.

Sources date back to around 350 BC and Aristotle already used propolis. The ancient Egyptians used it to embalm their mummies and the ancient Greeks used it to treat wounds, ulcers and other ailments.

How is propolis still used today?

Propolis is still used in naturopathy today. Since we at PureBee are neither trained in medicine nor therapeutic therapy, we cannot make any statements about the healing effects. We are also more interested in the cosmetic effects on the skin. However, what we do know is how it works in the beehive. A beehive can be thought of as a hot (constant 35 degrees) living space with high humidity. Thousands of bees live in a confined space. Every now and then a mouse or lizard "strays" too. All of these are ideal conditions for bacteria, viruses and fungi to multiply rapidly. Thanks to propolis, the stick is almost germ-free. An intruder like said mouse or lizard is stabbed and then quickly embalmed with propolis so as not to have any bacterial decomposition.

However, if you are interested in how propolis could have a healing effect on you, a trained therapist, naturopath or doctor will surely help you.

Every immune system reacts differently and propolis is an allergenic substance. So it may be that you are not allergic to honey or bee stings, but you do react to propolis. Especially if you use propolis as a tincture, make absolutely sure that you tolerate propolis before the first application.

Ingredients: What's in the putty resin? 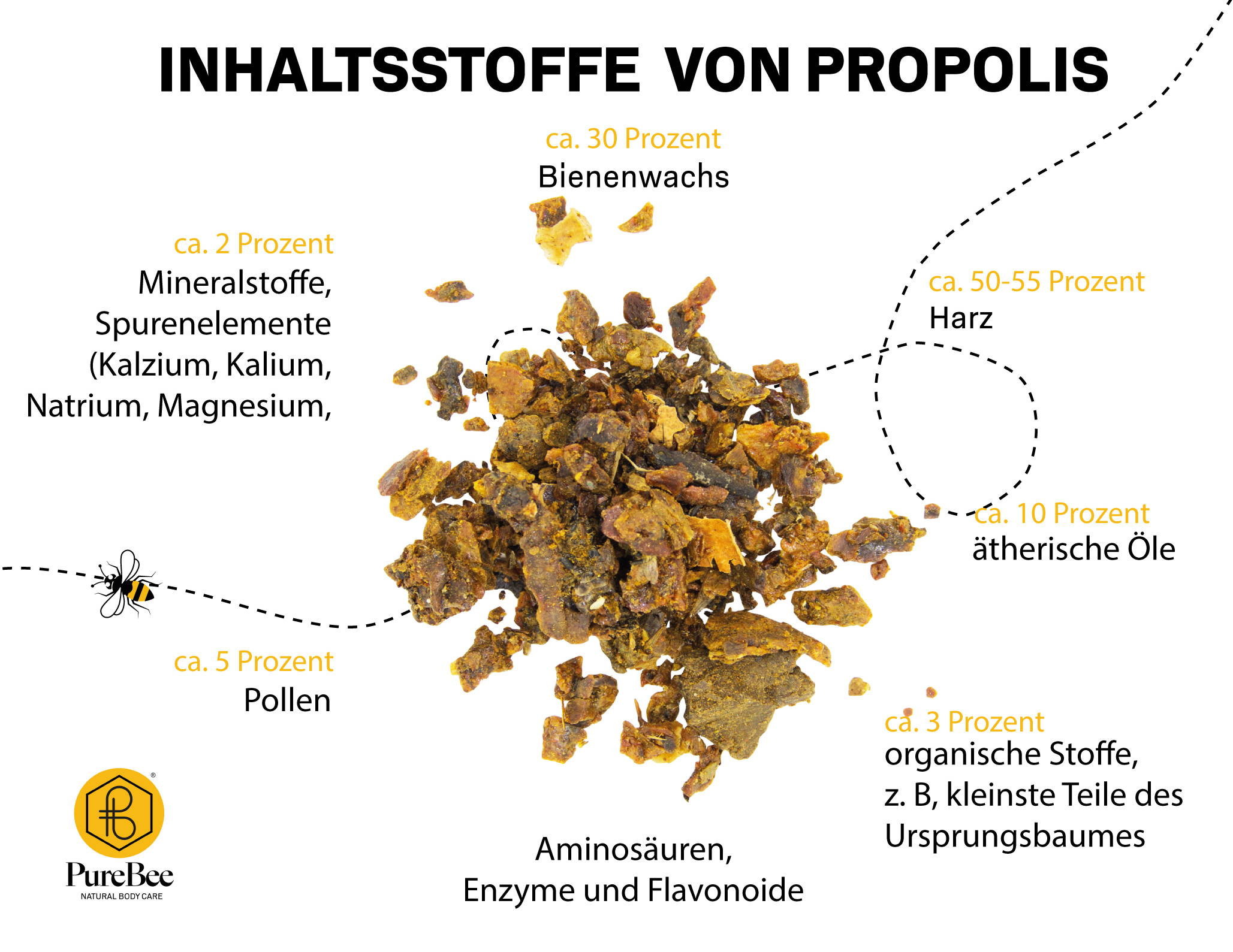 If you look at propolis in the laboratory, it is an organic compound that consists of about 50 percent resins, 30 percent beeswax, 10 percent essential oils, 5 percent pollen fractions, 3 percent organic substances and 2 percent nutrients (minerals, trace elements, amino acids, Enzymes, flavonoids).

To date, the putty has not been fully broken down and the question why it works so well against germs, viruses and fungi in the beehive has not yet been answered conclusively. Between 150 and 200 different ingredients have been discovered so far. But what complicates an analysis is that the composition of propolis is never the same, not even from the same floor. It depends on numerous factors such as the plant source and the activity of the bees. These variations can sometimes be seen in the color and taste of propolis, which is why our cosmetic products can always vary slightly in color.

WHERE IS OUR PROPOLIS COMING FROM?

Most of the propolis used in Germany is imported from abroad. A bee colony can produce up to 200 grams of putty resin a year and there are in Germany According to the German Beekeeping Association, around 150.000 beekeepers with a total of around 1.000.000 bee colonies. Many of these beekeepers are purely hobby beekeepers and only a very small number practice beekeeping as a profession. German beekeepers can only cover almost 20 percent of the need for honey, so it is hardly surprising that it is not possible to obtain large amounts of propolis in Germany.

But there is now also Eastern European propolis, which consists of almost the same ingredients (of course there are small differences due to the different plant source) as the domestic one. The test in Germany by laboratories and experienced beekeepers is important.

Our propolis production is also not quite sufficient for our cosmetic production. We therefore buy European propolis, which hardly differs in taste and smell from our propolis. Most of the propolis imported in Germany comes from China. We did some tests with Chinese propolis, and even if everything was fine with it from an analytical point of view, the taste and smell simply didn't convince us and we stick to the more expensive European goods.

The effect of propolis

As already mentioned several times, propolis has a pronounced antifungal, antibacterial and antiviral effect in the beehive. This effect against bacteria, viruses and fungi has already been observed in animals be detected.

The effect of propolis in the beehive is undoubtedly given. In 1966, the French researcher, Prof. Dr. Remy Chauvin, bees on parasites. Surprisingly, he found no parasites on the body of the bees. The situation was very different for other insects. The bees and the bee products were then examined in more detail. It was found that propolis is responsible for this phenomenon. The investigation of propolis was further intensified and has not been completed to date. So far, various vitamins of the B group have been found in propolis, in addition vitamins E, H and A. All trace elements and minerals important for the human organism are present. - Iron, copper, manganese, chromium, cobalt, zinc, tin, nickel, silicon, strontium, calcium, aluminum, vanadium, etc. - In 1976 it was found that propolis contains caffeine and ferulic acid. Both acids are characterized by a strong antibacterial, regenerative and biliary effect.

The effect of propolis can be easily observed for everyone on the floor: thousands of small insects live in a confined space at an ambient temperature of 35 degrees and very high humidity. If there were no sophisticated strategy against bacteria, viruses and fungi, no bee colony could survive long - the conditions described are too good for pathogens.

Propolis is very versatile and has great effects in the beehive. However, with all enthusiasm you must note that this is NOT a medicine and no statements can be made about the health effects or treatment of diseases in humans.

How does PureBee use propolis?

Propolis is unfortunately not water or fat soluble by nature. To be able to process it in our cosmetics, it must therefore be dissolved in alcohol beforehand. We sometimes hear from customers: "Why do all of your products contain alcohol?" and that's exactly why. There is no propolis without alcohol. The alcohol content in our products is relatively low and in no way harmful or drying out on the skin and is compensated for in our recipes by the nourishing properties of other ingredients. In addition, alcohol is of plant origin, which is very important to us.

From time to time you can also find "alcohol-free" propolis tinctures online. Unfortunately, this is only half the truth. While the product does not contain the drinking alcohol (ethanol) known to us, in most cases propylene glycol, a polyhydric alcohol, is the main ingredient. This is made synthetically and as for the skin questionable classified. Therefore we prefer to stick to the classic propolis tincture with real alcohol, which grandmother already used :-)

This is how honey is made